Just a few weeks ago, I ran my first ever marathon. Training for this race while experiencing intense grief was both an immense challenge and a blessing. It had been a long time since I had the experience of a poem just pouring out of me, and days after the marathon, here came this shiny new poem into the world.

Hi friends, it’s been a minute! Since we last talked, I went to the Bradford Literary Festival in the UK this past summer to perform for students, teach workshops to middle school kids and the festival participants, and share my thoughts on genocide and mysticism. I met so many incredible writers and friends from around the world, and even got to travel to the Scottish Highlands.

I also wrote a ghazal that was published by The Harpoon Review. You can check it out here.

Hi friends! It’s been a challenging year for many of us. I hope you’re holding yourself and your loved ones tightly. Here are some new poems I’ve been honored to have published in the past few months, and a few that are forthcoming:

After Orlando, Glass Poetry Press– On the Pulse shooting, but also on fear of being seen as gay in public, the privilege of safety, grief, and gun violence.

Ten Apologies to My Body, Drunk in a Midnight Choir– On body image, acceptance, depression, self-love.

Coming soon: Stay tuned for my poems in upcoming issues of The Offing, Beltway Poetry Quarterly, and in the Hysteria anthology from Lucky Bastards Press.

I’m very excited to announce that my 1-woman poetry show, The Personal is Political: These Simple Truths will make its theatrical debut at Poetic Theatre Productions’ Poetic License Festival this month. Directed by the amazing Sherri Eden Barber, this show explores how current events in the media surrounding issues like gay marriage, gun control, bullying and xenophobia are rooted in very personal, lived experiences, in the hopes of inspiring political beliefs to be shaped by compassion and empathy rather than vague notions of right or wrong. This show is really the embodiment of what I hope to do as a writer and performer, and it would mean so much to have you there.

After many years, I have a new Chapbook available. What You Can Give contains poetry about healing, survival and self-care and can be signed upon request. Click here to buy one, or to purchase a signed copy of my full-length book. 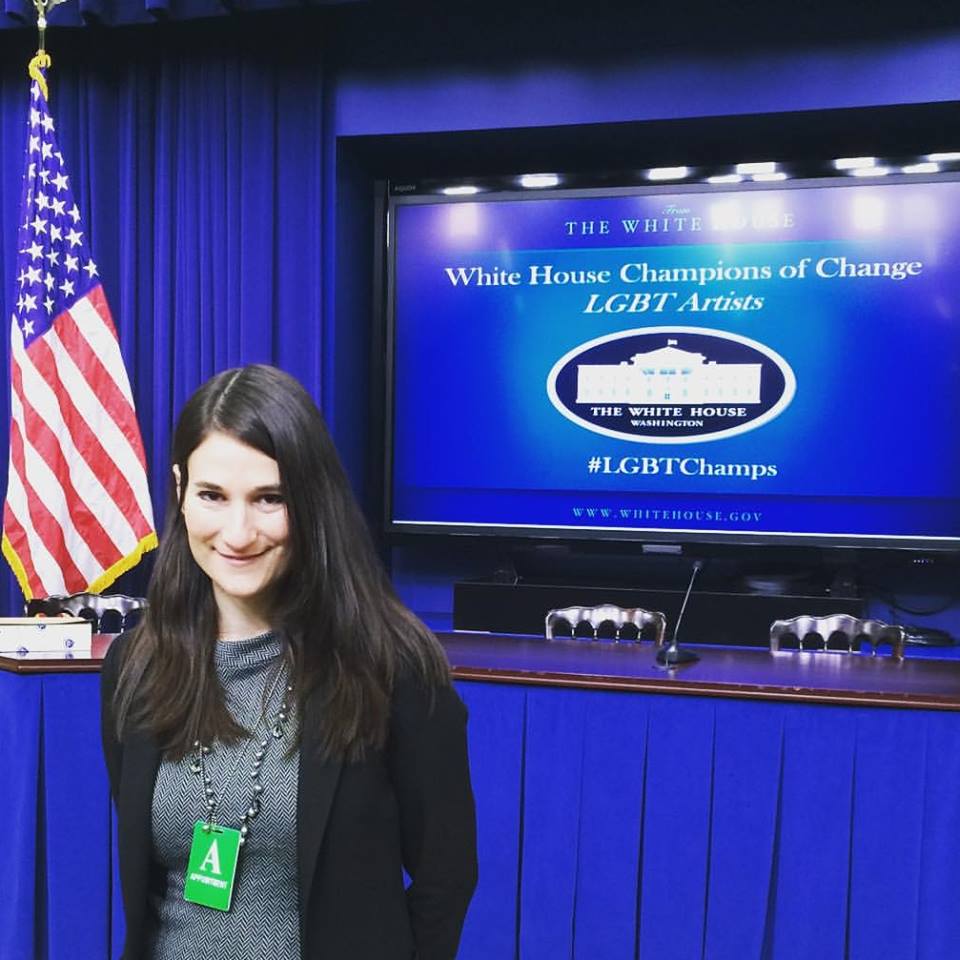 Hi friends! Just last week, I was invited to speak at the White House as one of nine Champions of Change for LGBT advocacy through art. It was an incredible honor to be selected out of hundreds of applicants across the country, and to have the chance to speak about what I’m ultimately hoping to achieve with my poetry shows, which is to inspire people to view political beliefs and issues from the perspective of personal, lived experiences so that these beliefs are based on compassion and empathy instead of vague notions of right or wrong.

The press release is below, and you can learn more and watch the video at www.whitehouse.gov/champions.

White House to Recognize LGBT Artists as “Champions of Change”

WASHINGTON, DC – On Monday, November 23, the White House will recognize nine individuals from across the country as “White HouseLGBT Artists Champions of Change.” These individuals were selected by the White House for their artistry in advocating for the LGBT community.  The program will feature remarks by Senior Advisor to the President Valerie Jarrett and Secretary for the United States Department of Housing and Urban Development Julián Castro, and screenings of the show Transparent from Amazon Studios and the Focus Features film The Danish Girl. The event also marks an important day in the LGBT community, Transgender Day of Remembrance, observed on November 20.

Marco Castro-Bojorquez is the Community Educator in Lambda Legal’s Western Regional Office in Los Angeles, California. Marco is responsible for the coordination and implementation of Lambda Legal’s various educational and advocacy efforts. He has produced and directed several short films and documentaries, including the award- winning documentary Tres Gotas de Agua (Three Drops of Water, 2013), a short film about Latina immigrant mothers and the impact of their children’s coming out process. In 2015, he premiered El Canto del Colibrí (The Hummingbird’s Song), a documentary about Latino immigrant fathers and their LGBT children as they come out of the closet.

Fiona Dawson established TransMilitary to promote transgender equality through media that educates, entertains and inspires. The project intimately shares the lives of U.S. transgender military personnel who served under the threat of discharge. Having co-directed and produced the short opinion documentary Transgender, at War and in Love, commissioned by the New York Times, she is now working on the feature length version of the film. An American immigrant, Fiona lived in Houston, Texas, for more than ten years working in the nonprofit sector and was voted the city’s Female Grand Marshal for the 2010 LGBT Pride Parade. She is a proud member of the bisexual community and has served on the National Board of Directors of the Human Rights Campaign (HRC). Fiona is currently on the Board of Directors for the National Lesbian & Gay Journalists Association (NLGJA).

Jess Dugan is an artist whose work explores issues of gender, sexuality, identity, and community. She has been photographing within LGBT communities for the past decade and is deeply committed to the transformative power of photographic portraiture.  Her work is regularly exhibited internationally and is in the permanent collections of several major museums.  Her current project, To Survive on this Shore,combines photographs of transgender and gender-variant older adults with interviews about their life experiences in regards to gender, identity, age, and sexuality, and provides a nuanced view into the complexities of aging as a transgender person in the United States.

Joanna Hoffman is a 12-year veteran of slam poetry. Her full-length book of poetry Running for Trap Doors was nominated for a Lambda Literary Award and featured in the American Library Association’s list of recommended LGBT reading for 2014. She has performed her one-woman poetry show, The Personal is Political: These Simple Truths, on topics of bullying, homophobia, racism and mental health, and conducted poetry workshops with youth at LGBTQ community centers, performance venues, high schools and colleges across the country. She works at the nonprofit organization Peace is Loud.

AJ King serves as the Founder of Breaking Ground. Formerly known as “Brother 2 Brother,” this program targets men and trans youth of color in Washington, D.C., to tell their life stories through musical theatre, and identify non-violent conflict resolution. The program began as a fellowship project and blossomed into a full program presented at the national HIV/AIDS conference, NAESM. This program incorporates social justice trainings, leadership development, and a safe space for the participants to disclose their life stories and then present those stories onstage. This program concluded its last cycle with two sold-out shows at the Anacostia Arts Center in October 2014.

Pidgeon Pagonis, M.A., is an intersex activist. They are the former Communications & Operations Manager and Youth Leadership Coordinator for Inter/Act, an intersex youth project, at Advocates for Informed Choice–an organization that fights for the legal rights of intersex children and their families. Since 2006, they have made an effort to expand the visibility of issues related to the intersex community by facilitating workshops and presentations around the world.

Lee Levingston Perine is the Founder of Makers Lab in Washington, D.C. Through Makers Lab, Lee has built and supported queer communities by creating spaces that celebrate life, art, and queer culture. Since launching in August 2015, the Lab has produced and been a collaborator in the production of 35 cultural events in the region. The Lab recently received a grant for the Last Night Project, a story-collecting project that explores Black queer space in Washington, D.C. Previously, Lee founded and ran Lovebus Events & Design, a boutique event planning company that specialized in wedding planning for LGBTQ couples.

LJ Roberts is a visual artist who creates large-scale knitted installations, detailed embroideries, screen prints and collages.  Their work investigates overlaps of queer and trans politics, activism, protest, craft and the ongoing AIDS epidemic through an intersectional feminist lens. Among their upcoming projects are a collaboration with Visual AIDS to create a sex-positive woman-centered safer sex kit as part of the forthcoming show Agitprop! at The Brooklyn Museum .

Steven Romeo is the founder, executive director and primary artist for The Change Project based in Birmingham, AL. The Change Project is an arts and storytelling organization that seeks to transforming discrimination against all LGBTQ (Lesbian, Gay Bisexual, Transgender, Queer) people into acceptance through the art of photography, social media campaigns, educational resources and partnerships with social justice organizations. Steven’s first fine art installation is “Our Bodies. Our Lives,” which engages viewers to consider what LGBTQ people want to be called versus the labels that society places on them. Steven currently studies at The University of Alabama at Birmingham, working towards his master’s degree in Public Administration with a focus in non-profit management.

You know how you can go a long time without hearing from a friend, but when you do reconnect, it’s like no time has passed at all? Those kind of friendships are awesome. Hi! I’ve missed you!

Some updates from me:

If you read my book Running for Trap Doors and liked it, I would really appreciate an Amazon review! Or, if you’d like to buy a signed copy, you can do so here.

How’s your 2014 been? Want me to come read poems or teach a workshop at your school/organization/venue? Hit me up!

Happy February, world! This week I turn a year older and what I would love most for my birthday is for those who read my book and liked it to please write an Amazon review! If you haven’t read it and would like to, you can order a signed copy here.

Also, I’m excited and honored to have two new poems in the latest issue of Union Station Magazine. Check them out here (along with a large picture of my face), and be sure to read through the rest of the site for poems by some of my favorite writers.

I would really love for 2014 to be the year of me getting to read at more high schools and colleges. If you think I’d be a good fit for your school, please get in touch!

Just a quick update to say that today, Sibling Rivalry Press nominated me for a 2013 Pushcart Prize! This has been a far-off aspiration of mine for so long, and I’m incredibly honored and grateful. The nominated poem, High School Electives, can be read here and also in my book.